If you'd like to see how a union plans to exploit and target workers if the hallucinogencially-named Employee Free Choice Act (aka "card-check") is passed, read this post.

Last weekend, we reported on what appeared to be a new union battle that the SEIU was going to wage by invading the UFCW's turf and attempting to unionize grocery workers.  The foundation of this was an interview new SEIU boss Mary Kay Henry gave to a reporter.  On Tuesday, the SEIU was forced to issue a press release reassuring the UFCW it had no plans on invading (also known as raiding) the food sector.

Well, it turns out that the SEIU's "correction" (see above) may not be entirely accurate.

Internal SEIU documents have exposed a December 2009 plan hatched to unionize the nation's fast food workers.  The SEIU plan details how the purple behemoth plans on targeting fast-food chains in Los Angeles first, the using L.A. and an "east coast" city as a spring board into other cities.

The SEIU's plan is based on a labor landscape that is post Employee Free Choice Act, but its strategies demonstrate how the SEIU plans to use EFCA to unionize an almost-entirely union-free industry.  While there is much to comment on about the SEIU plan and how a union targets workers within an industry (see highlighted text), we're just going to show you the plan itself.

In its plan, the SEIU states:


Our initial probing in this industry has taken place in the Los Angeles metro area.  Los Angeles County has over 60,000 fast food workers in just the top ten chains.  When we mapped out the restaurants of the major chains, we saw that they encompass large groupings of low income tracts.  While just over 20,000 workers are employed in the top 10 chains in Fast Food in LA, we have broke [sic] down 75% of the geography into 4 Clusters.  This encompasses just over 15,000 of the 20,000 workers.


Organize 15,000 food service workers in LA County and thousands of additional workers in an east coast market within the first 6 months, and begin raising the standards for these workers.


While the SEIU's plan was prepared during the reign of Andy Stern and presented to the SEIU's Executive Board, there is no indication to believe that this plan has changed as Mary Kay Henry has committed $4 million to organizing and was part of the Executive Board at the time of this proposal.

You can read the rest of the SEIU plan here (captured just before it was mysteriously 'scrubbed')... 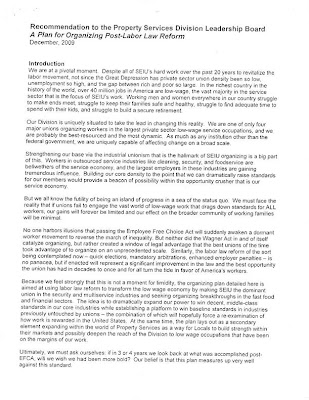 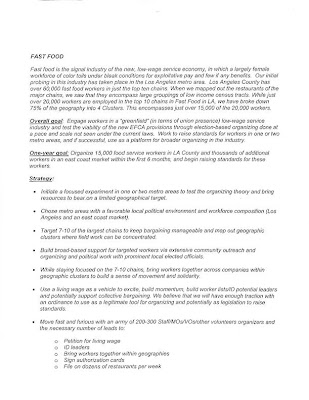 
For more news and views on today’s unions, go to LaborUnionReport.com.

Posted by LABORUNIONREPORT.COM at 2:51 PM