Posted by LABORUNIONREPORT.COM at 11:34 PM 4 comments:

LABORUNIONREPORT.COM is pleased to report that our new website (and blog) is operations.

We will NO LONGER be posting on this site.

Posted by LABORUNIONREPORT.COM at 6:36 PM No comments:

It's been said that there is no honor among thieves...

An AFSCME official stole $180,000.  Big news?  Not really.  Union corruption in the form of union bosses stealing from their members happens all the time.  What is surprising  is when union bosses steal from one of their own.

A former union official from Milwaukee has agreed to plead guilty to embezzling about $180,000 of union funds, according to federal court records.
Paula Dorsey, former president of District Council 48 of the American Federation of State, County and Municipal Employees, withdrew the money from an account between 2004 and 2009 to finance her gambling habit, said Mel Johnson, an assistant U.S. attorney. Dorsey faces a maximum penalty of five years in prison, a $250,000 fine and three years of supervised release, in addition to repayment of the estimated amount stolen.
The money was intended to fund Operation Big Vote, a national initiative to increase minority voter turnout.

So what is Operation Big Vote? Well, it appears to be one of the nuts from the fallen ACORN tree...

This year alone ACORN has registered 1,315,037 voters.
Although the organization prides itself for its registration efforts, it also has a long history of scandal. In the state of Missouri in 1986, 12 ACORN members were convicted of voter fraud. But that case was not an isolated incident in the state. In December 2004, in St. Louis, six volunteers pleaded guilty of dozens of election law violations for filling out registration cards with names of dead people and other bogus information. Authorities launched an earlier investigation after noticing that among the new voters was longtime St. Louis alderman Albert “Red” Villa, who died in 1990. The volunteers worked for “Operation Big Vote” — a branch of ACORN — in St. Louis.

Cross-posted on RedState.
For more news and views on today’s unions, go to LaborUnionReport.com.

Posted by LABORUNIONREPORT.COM at 12:24 PM No comments:


Machinists union members at Spirit AeroSystems are voting today on whether to accept the company's 10-year contract offer.

Of close to 20 Machinists interviewed this morning, most said they were voting to strike.


Machinists union members at Spirit AeroSystems rejected the company's offer of a 10-year contract on Friday, but lacked the votes required for a strike.


As a result, members ratified the contract by default.


Of those voting, 57 percent rejected the contract. Fifty-eight percent voted to strike, falling short of the two-thirds required for a work stoppage.

Posted by LABORUNIONREPORT.COM at 2:43 AM No comments:

What do you do if you're up to your eyeballs in snot and someone throws a turd at your head?  In Andy Sterns' case, he quits the SEIU and becomes a corporate dude.  This may be why:


John Harris relays a meeting on Nov. 3, 2008 with himself, two union leaders -- Andy Stern and Tom Balanoff -- and the governor.

In a previous call played to jurors, Harris testified he and Blagojevich understood the two were approaching him on behalf of Obama's camp.

The meeting happened one day before the presidential election and the talk was about the senate seat vacancy the major campaign donors expected would happen the next day.

Posted by LABORUNIONREPORT.COM at 3:53 PM No comments:

They'd rather let a man's home flood than let a non-union operator on to a piece of equipment?


Witnesses said pickets at scene, however, prevented the Gatlin employees from using the crane, saying that only union operators were allowed to run them.


"They gathered around and wouldn't let the guys get to the equipment," said Diane Brzycki, who lives across the street from Milton. "They just stood there in the middle of the road."


A spokesman for Gatlin acknowledged there was a "dispute" Thursday morning but that the company and the union workers settled it. But whatever they agreed upon did not help Milton, whose property to the north of his just-completed house was still under standing water Thursday afternoon.


"They don't give a hoot about what happens to my house; they weren't even going to turn on the pumps," Milton said. "Gatlin came to turn them on, but the Teamsters said no, not without union operators.


"I'm a union person myself, but I wouldn't allow someone's house to get flooded."

Posted by LABORUNIONREPORT.COM at 10:27 AM No comments:

It must pay to have friends in low high places because less than a week after the National Rifle Association sold out Americans' First Amendment rights for its own special deal, union bosses have had their Democratic sock puppets exempt unions from the DISCLOSE Act as well.


The change, inserted by Rep. Bob Brady (D-Pa.), chairman of the committee charged with handling the bill and a key union ally, would also affect other groups funded by members who pay dues of less than $50,000. While the move may satiate liberal Democrats who had become uneasy with an exemption for the National Rifle Association, a union loophole will certainly cause Big Business to cry foul.

[Update] From the Alliance for Worker Freedom:


The DISCLOSE Act marks a stark departure from the traditional treatment of corporations and unions by applying punitive measures to associations in the corporate form, but not to labor unions, even though these groups have traditionally been treated similarly in campaign finance law:


With Democrats throwing the Constitution out to special interests with the highest bid (or the best back-room talents), it is no wonder hard-working Americans no longer have faith in their government.

If special interests were lollipops, Democrats would be lining up to see who could suck the hardest.

“I bring reason to your ears, and, in language as plain as ABC, hold up truth to your eyes.” Thomas Paine, December 23, 1776

Posted by LABORUNIONREPORT.COM at 4:20 PM No comments:

Obama's Oil Spill: Just get out of the way...

Yeah, British Petroleum may have caused the gusher, but President Obama and his union-controlled federal bureaucracies now own the disaster: 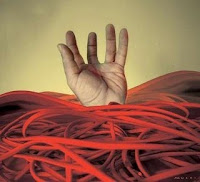 Governor Riley was in Huntsville Wednesday afternoon updating leaders on the state of our state... namely how we're dealing with the oil spill.


He said he believes Alabama leaders could have stopped the oil from lapping onto our shores, if only they had the tools from the start.


"Can we protect our shores?" Governor Riley asked. "Sure you can, but you can't do it with the situation that you have down there today."


Riley says there are about 20 federal agencies that have veto power, and they all have their hand in the decisions to clean up the spill; that creates gridlock, so nothing gets done.


The Governor says there was a boom in Alabama that would have protected the 25 miles of coastline from the oil, but he says government leaders moved it to Louisiana, saying that state needed it worse. Then, the plan was to put up a snare boom across the beach.


"Sounded like a plan to me until Fish and Wildlife said, 'Nope. You can't do that because it'll catch turtles in the net,'" said Riley.


So, then the plan changed, and 400 workers would be hired to clean the beach.


"Sounded great right up until OSHA said, 'Nope. It's too hot for 'em to work.' So, now they're limited to working no more than 20 minutes out of the hour or a maximum of two hours a day," said Riley.

What is perhaps the world's worst environmental disaster in history can now be laid squarely at this President's feet.  He may not have started it, but his government has helped spread it.

Mr. President, please get your bureaucracy out of the way and let real men and women clean up the mess you helped create.

Posted by LABORUNIONREPORT.COM at 11:36 AM No comments:

Posted by LABORUNIONREPORT.COM at 10:39 AM No comments:

Okay, that's not their politically-correct terminology, but it should be...


Despite a slightly more upbeat report, Business Roundtable Chairman Ivan Seidenberg said chief executives still have plenty of angst. They are not sure if the economy will continue to build momentum and are concerned about new congressional proposals to increase taxes and regulations on business, he said.


"There's a lot of caution on the part of CEOs," Seidenberg said after the report was issued Wednesday. "We are not expanding as fast as we expected to at this stage of the recovery."


The day before the report, Seidenberg warned of a "growing disconnect" between business and government that he said are preventing the economy from growing faster and creating more jobs.

Now, wait for the job killers on the Left to complain...

Posted by LABORUNIONREPORT.COM at 12:07 PM No comments: