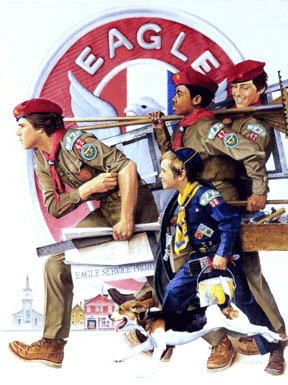 Just when you thought the Purple People Eating union known as the Service Employees International Union (SEIU) and their thug-like tactics couldn't sink any lower comes this story from Allentown, Pennsylvania.

In pursuit of an Eagle Scout badge, Kevin Anderson, 17, has toiled for more than 200 hours hours over several weeks to clear a walking path in an east Allentown park.

Little did the do-gooder know that his altruistic act would put him in the cross hairs of the city's largest municipal union.

Nick Balzano, president of the local Service Employees International Union,
told Allentown City Council Tuesday that the union is considering filing a grievance against the city for allowing Anderson to clear a 1,000-foot walking and biking path at Kimmets Lock Park.

"We'll be looking into the Cub Scout or Boy Scout who did the trails," Balzano told the council.

Balzano said Saturday he isn't targeting Boy Scouts. But given the city's decision in July to lay off 39 SEIU members, Balzano said "there's to be no volunteers." No one except union members may pick up a hoe or shovel, plant a flower or clear a walking path.

"We would hope that the well-intentioned efforts of an Eagle Scout candidate would not be challenged by the union," said Mayor Ed Pawlowski in an e-mail Friday. "This young man is performing a great service to the community. His efforts should be recognized as such."

Balzano said Saturday the union is still looking into the matter and might cut the city a break.

"We are probably going to let this one go," Balzano said.

Back in July, after two weeks of negotiations with the SEIU failed to reach an agreement, the City of Allentown was forced to lay off 39 SEIU-represented employees. According to Allentown's newspaper the Morning Call:

[Allentown Mayor] Pawlowski wanted members to defer roughly half of a 8.9 percent increase that kicked in on Saturday in exchange for no lay offs, but members narrowly rejected the offer two weeks ago.

On Monday, the mayor made a second offer that included a second pay cut in the form of a shorter work week for the remainder of the year. That offer was rejected by union heads and not taken to members for a vote.

"During the current economic downturn, the city has been attempting to reduce costs to avoid the layoff of city staff," Pawlowski said in a written statement this afternoon.

"Unfortunately, the union rejected both of these offers leaving the city no choice but to reduce the workforce through layoffs."

Now, when an Eagle Scout does something good for the City of Allentown, the SEIU bosses make a stink!

We wonder, does this mean that whenever a cub scout helps a little old lady cross a street the SEIU bosses will file a grievance too?